In 2009, Avatar well and truly took over the world. For months all you could hear about was the unrivaled scope, incredible animation and immersive experience of the fantasy epic – and for good reason, at the time it felt groundbreaking. That was over a decade ago though, and director James Cameron has been talking about the sequels (yes, all four of them) consistently since, production on Avatar 2 ended in November 2019.

As we all get ready to go back to Pandora for the next instalment – here’s everything you can expect to see in Avatar 2.

What is the release date for Avatar 2?

Why has it taken so long?

Anyone who has tracked the production will know that the follow-up to the 2009’s epic has been troubled to say the least.

In 2006, Cameron said he had intentions to create a franchise around the film if it was successful – and $ 2billion later, he confirmed that sequels were in the work in 2010.

Since though, there have been several push-backs and hiccups along the way. At one point the film was due out in December 2014, and has since been pencilled in for several different release dates for it only to be continually pushed back.

Now that this has come down to production hurdles as well as the expansion of the franchise. Originally slated to become a trilogy, two extra films were added to the schedule, bringing the total to five. Namely, Cameron has insisted that he wanted to finish planning and writing every instalment in the franchise, and now that Avatar 5‘s script is finally completed – production on number two can begin.

Where will it be filmed?

The film was shot in New Zealand – but has come at a steep price. The film studio had to commit over $ 500million in costs and agree to host the world premiere in Wellington, New Zealand as dictated by the government.

What is the title of Avatar 2?

The long awaited sequel was finally given the name Avatar: The Way Of Water, 13 years after the release of the first film at CinemaCon in Las Vegas

When can we expect the first official trailer for Avatar 2?

A trailer finally dropped at CinemaCon in Las Vegas where spectators were given 3D glasses for a clip which contained almost no dialogue and saw viewers immersed in different regions across the world of Pandora.

The footage also showed the local tribe of Na’vi interacting with various species resembling whales and pelicans, some of which flew through the screen and into the audience member’s faces thanks to the three-dimensional technology.

Cameron appeared in a pre-recorded video to tell viewers the sequel is “designed for the biggest screen and the most immersive 3D available,” adding that he “set out to test the limits of what cinema can do.”

The trailer for Avatar: The Way Of Water is set to debut in the cinemas ahead of Marvel’s Doctor Strange In The Multiverse Of Madness on May 6, 2022.

Other than that all we’ve been shown so far is a first-look image of a new character named Miles Socorro, aka Spider, played by Jack Champion. He is the human child Jake and Neytiri. Born at the military base on Pandora, he was too small to return to Earth; so he’s been raised in the bioluminescent jungle by Jake and Neytiri.

Producer Jon Landau tells Empire how he fits into the family story at the heart of the long-awaited sequel. Read more here: https://t.co/oh0fGB73O6 pic.twitter.com/qcFc2DYT08

Another pic inside a “sneak peek” of the set after filming wrapped for November 29, 2019 – see the shot below.

It’s our last day of live-action filming in 2019, and we’re celebrating with a sneak peek. 👀

Check out this photo of the aft well deck section of the Sea Dragon, a massive mothership that carries an array of other sea-going craft in the sequels. pic.twitter.com/AXgAve6aTG

Sam Worthington and Zoe Saldaña who played Jake Sully and Neytiri in the first will return for the sequel. Sigourney Weaver is also set to be involved with the new film – despite conflicting messages from Cameron and Weaver. Cameron had previously suggested that Grace Augustine (Weaver) would be back in the films, despite her death, but in 2015 Weaver insisted that she’ll be involved but as a new character.

Cameron also confirmed that Stephen Lang (Colonel Miles Quaritch) shall be in the film too, despite his character’s death. It’s all very confusing, but hey, everything about this movie is. 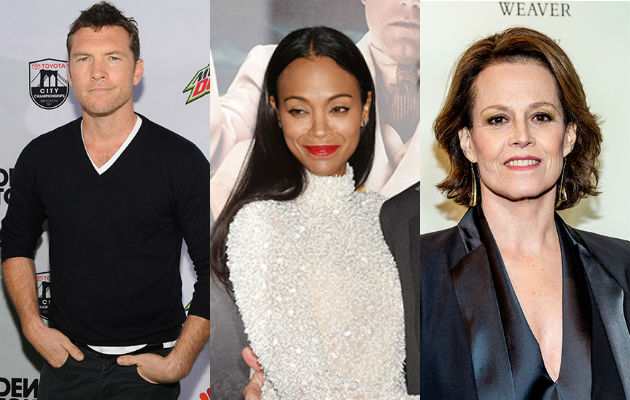 What else do we know about the plot?

Cameron has been fairly guarded about the plot for the film thus far, despite telling all elsewhere. He has confirmed that the humans will serve as the antagonists again and that the film will focus more on the oceans of Pandora and the rainforest. In future instalments, the other moons of Polyphemus will be explored.

Producer Jon Landau has revealed that one of the central themes in Avatar 2 is family. “If you look at what Jim does in his movies, he writes in universal themes that are bigger than the genre of any one movie,” he told Empire in December 2021.

“This time around, we’re taking Jake and Neytiri and building the most universal theme of all around them. Which is family. Jake comes from the human world, Neytiri from the Na’vi world. So, they’re like a modern mixed-race couple, raising kids who perhaps feel they don’t belong to one world or another. ”

He also said of the new character Spider: “Jake took him in but Neytiri always saw him as one of the people who destroyed her home and killed her father; so you have all these dynamics playing out. ”

We’ll update you on Avatar 2 right here as more information is revealed so bookmark this page if you’re a fan.