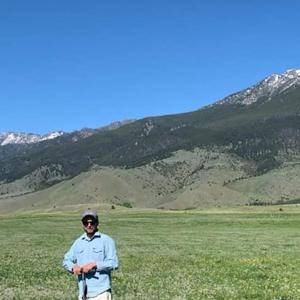 “We’re helping producers increase their bottom line through biology,” said Smith of RLS, the ag consulting business he owns with his father, Vern Smith. “Getting soil biology correct helps balance out the system.”

The Smiths have been helping producers improve their soil life, improve their quality of life, and lower chemical inputs at RLS in south central Montana.

Biology testing provides a detailed soil biology profile, which examines microorganisms in the soil, such as bacteria, fungi, and protozoa.

“In addition, in-season tissue testing can give producers the confidence to cut back on inputs and monitor for deficiencies, which can often be small quantities of micronutrients instead of macronutrients such as nitrogen, phosphorus, or potassium,” Smith said.

“Natural nutrient cycling creates more nutrient-dense crops, which is healthier for people and livestock,” he said.

In agriculture, there is constant disturbance to soil life through tillage, salty fertilizers, overgrazing, and pesticides.

“These disturbances to the soil are hard on soil fungi and result in more bacterial-dominated soils,” he said. “That encourages annual weeds and grasses, instead of our desired perennial crops and healthy rangelands.”

The Smiths use products from Earthfort that promote beneficial biology in the soil in their research trials they have been conducting.

Two of those products that use RLS include: Soil ProVide, a liquid inoculant with diverse soil microorganisms; and Soil ReVive, a water-soluble powder with ingredients that feed on a living soil, as well as hyphal fungi.

Vern and Ford started out researching their own land.

“Vern wanted to know the potential of his fields. He took a soil biology test from Earthfort Labs and found there was less beneficial fungi activity in his soils, “Smith said.

Vern set up a simple trial. One side of his front field was treated with Soil ProVide and Soil ReVive twice. The other side of the field was untreated.

“Dad treated the soil with a prebiotic and a probiotic two years in a row. The treated section has significantly thicker and healthier grass / alfalfa strands than the untreated side, “he said.

“The DNA showed that on the untreated side, there were significantly more bacteria associated with unhealthy acidic soils,” Smith said. “This was something these fields have been dealing with for 20 years, but the biology healthy helped balance out the system.”

The RLS team, along with MSU, Eberly, and AMB West, one of their neighbors, conducted another “more scientifically rigorous” trial in Paradise Valley starting in 2018.

“We set up a replicated trial and used the same products Vern used on his fields, ProVide and ReVive, which are wide spectrum, highly-diverse probiotic and prebiotic food sources for the soil,” he said. “We also applied Spectrum / Nutrinate, which are similar products. The main difference is that Soil ProVide comes from a natural source and has a wide variety of beneficial bacteria and fungi and the spectrum is made into a lab and it has a short list of targeted bacteria and fungi. “

The biology treatments were applied on top of the regular program in both fields.

After two years, they found the soil organic matter – the carbon – increased on the diverse treatment with ProVide. In addition, there was better nutrient cycling.

After that research, RLS conducted another side-by-side trial with AMB West, which demonstrated the differences between a biological approach and a traditional chemistry approach.

There were two treatments on a field that was seeded as a grass alfalfa field.

For the biological approach, they used Earthfort’s ProVide and ReVive, Fish Hydrolysate, and G22 fertilizer. They came up with rates based off of biological and chemistry soil tests.

For the traditional treatments, the owners applied their usual chemical application that they have always used on the fields.

The first summer, MSU helped set them up on a biological program with a sampling grid layout and a layout on the other side of the traditional chemistry program.

They also tested the feed value on the fields as they were cut and baled.

“There was slightly higher protein with higher feed value on the biological side,” he said.

With the nutrient testing, they found the plants were healthier on the biological side.

On the traditional chemistry side, there was more bare ground.

“We wanted to check the perennial field and we found about 50 percent more on Cache Meadow Brome than the biological side of the traditional side,” he said. “Alfalfa was almost equal on both sides.”

Because of the bare ground spots on the traditional side, they found new weeds flourishing in those spots.

“We see a lot of growth in Montana for what we are doing – many people are not aware of the potential of their soils. There are also a lot of biologically-friendly fertility products for folks who want high production but don’t want to sacrifice long-term soil health, which is the key to an operation’s long-term success, “Smith said.

At RLS, they believe testing for soil biology, soil chemistry, and in-season tissue testing are the beginnings of building a biological fertility program.

“The RLS foundation begins with an open mind and being open to seeing things differently. We would like to have people rethink their fertility program and make it more biologically-friendly, increase resilience in these dry years, and make operations more profitable to keep people on their land, “he said.

Vern Smith has been managing land holistically since the 1980s and ranching in Paradise Valley for 32 years. After a Ranching for Profit seminar in 2004, Vern began his soil health and biological education journey.

His son, Ford Smith, grew up working on the family ranch along the Yellowstone River. Smith graduated with a degree in economics and political science at Williams College. He is excited to show producers about how biology testing and in-season tissue testing can be added to traditional soil tests and make a difference on their land.

Get the latest agriculture news delivered to your inbox from The Prairie Star.