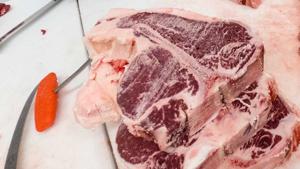 GYPSUM, Colo. (AP) – It’s incongruous to attach a gleaming wing of the futuristic, $ 2 million Cirrus Vision Jet to another gorgeous high-plateau skiing at Eagle County Regional Airport, and then stuff the plane with it. liquid byproducts of McRibs and flank steak.

But the modern era sometimes arrives to the sound of strange hoofbeats.

The tallow-based fuel employed by the Vail Valley Jet Center is advertised to cut the carbon output of private or commercial jet flights by 25%, burning cleaner than non-bovine fuel sources. The mix is ​​30% of the fat-derived biofuel and 70% of the traditional jet kerosene. And it is now being marketed by a tanker blaring sustainability ads from the jet service center, parked near the tarmac for Vail flyers to see.

Increasing use of sustainable aviation fuels, whether made from tallow or other renewable feedstocks, is key to reducing greenhouse gases from an industry that makes up 3% to 9% of global emissions, according to experts at RMI and other analysts.

Aviation is considered a stubborn carbon industry – to date, no other energy source has the necessary power-to-weight ratio of jet fuel to get heavy aircraft off the ground. Battery-powered electric aircraft are under development, but adoption is at least a decade away, experts estimate.

Meanwhile, big companies like United Airlines and the owners of corporate private jets are under heavy pressure to do more about the environment. When they hear a fuel is available that can reduce the carbon footprint by 25% – a conservative estimate, according to RMI – they want it straight in their aircrafts’ veins, said Paul Gordon, Vail Valley Jet Center general manager.

They contact flight support centers and say, “Look, we want to buy sustainable aviation fuel every time we go flying. How do we accomplish this? ” Gordon said, watching his tarmac crew load the Cirrus with the sustainable fuel.

Aviation and decarbonization experts have heard about every Big Mac joke about the tallow fuel, but are adamant that innovative fuel technology is crucial for greenhouse gas reduction as demand for world travel bounces back above pre-pandemic levels.

“We think sustainable aviation fuel will play a really important role in decarbonizing the aviation sector, and is basically the only tool we have in our arsenal” before electrification becomes commercially viable in about 2030 to 2035, said RMI’s Laura Hutchinson. Aviation expert and manager in the Nonprofit Institute’s Climate-Aligned Industries section.

It can be tough, she acknowledged, explaining to jet pilots or environmental groups or reporters how something like beef tallow reduces carbon by the time it shot out of a jet engine at 500 miles per hour.

“One of the most challenging things about this story is the standpoint that all the environmental benefits of it are a lifecycle logic,” she said.

That means: When it burns, the carbon output is the same as kerosene.

But everything it took up to that point – well-to-wake in their parlance – produced less carbon than conventional fossil fuel extraction and refining. The beef fat, for example, would have otherwise gone to waste. By replacing 30% or more of the fossil fuel with a waste product, the carbon footprint is deemed measurable by the UN and other international bodies charged with the calculations.

The hamburger helper is not cheap, though. Gordon estimates sustainable fuel adds about $ 1.10 to the current $ 6 to $ 7 a gallon price of traditional aviation fuel. While commercial airlines like United are moving quickly to lock down as much of the sustainable alternative supply as they can find, uptake in a new area like Eagle County Airport starts slowly.

The jet center sold about 1,000 gallons of sustainable fuel in its first month, Gordon estimates, out of a million gallons a month of total fuel use in the busy ski season months.

In mid to late April, the commercial flight schedule from United States and other cities like Dallas or New York has slowed down a bit. But the Eagle County tarmac is littered with private jets from South America, with about 80% of flights flying from Mexico to Easter break, Gordon said.

Jet center owner Signature Aviation pumps 1,000 gallons at a time when refueling big commercial flights. Private jets may take only 50 to a few hundred gallons at a stop, for a few thousand gallons of tanks.

Matta’s Cirrus only needed about 20 gallons. An orthopedic surgeon and pilot, Matta flies the sleek jet to conferences and surgical consultations. The Cirrus has a 1,200-mile range.

The compact Cirrus is a favorite among the ground crews, full of interesting technology and easy access to the wing fuel ports. Line service technician Nicola Oliveira and line operations manager Dwayne Noriega are happy to chat up the various pilots and passengers who see the decorated sustainable fuel truck and have questions.

“It’s going to take a long time to match the jet fuel actually sold out,” Oliveira said. “But it’s a good thing.”

The jet center and parent Signature Aviation, which bought the servicer in December, have other plans to green up the airport. Gordon is scouting on vacant areas between the plateau between Gypsum and Eagle that could fit a solar panel farm for on-airport electrical needs. The Cirrus was moved around on the tarmac by one of the handful of clean electric tugs the jet center has added.

Matta is willing to give the tallow a try, as long as the engine manufacturer accepts the renderings as the real thing. (They do, according to RMI.)

“I don’t want to void my warranty,” Matta said.

As for the environmental benefits, Matta does not claim a megaphone on climate change. He sees the prime benefit of alternative aviation fuels as a finite supply of fossil fuels for other uses.

Matta said he is among those who need more convincing that shortening has a carbon life cycle advantage over kerosene.