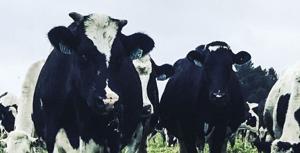 US milk production was 1.7 percent less than a year ago in January, but this moderated to about 1 percent less in February. Cheese production and seasonably growing ice cream and frozen dairy products are claiming a growing portion of available milk at the expense of butter and dry skim milk, the traditional supply balancing products.

Domestic commercial use during the first months of the year was robust for butter, all major types of cheese and total milk vs. both fat and skim solids. Meanwhile US dairy exports rebounded in February to 16.6 percent of US milk-solids production, up 14 percent in the following two months. Wholesale dairy-product prices continue to rise, but some retail prices are rising much faster – especially for liquid milk and just recently butter.

US average milk prices are expected to reach about $ 27 per hundredweight during the second half of 2022, according to current futures. But feed costs will reach the same inflated levels as they did during the drought period of 2012-2013. That will restrain Dairy Margin Coverage margins, but still rates at more than the maximum coverage level of $ 9.50 per hundredweight.

Commercial use of dairy products

The pandemic boosted liquid-milk sales and manufactures wide divergences in various types of sales of liquid products. During the pandemic’s first year, March 2020 through February 2021, total organic-fluid-milk sales were approximately 12 percent higher than during the same months a year ago. Total traditional milk sales declined by 1 percent, year-over-year, during the same period. Sales of whole milk, both traditional and organic, were about 3 percent more. Total reduced-fat milk was about 4 percent less than a year ago.

But during the next 12 months, March 2021 through February 2022, those differences largely disappeared. Organic sales dropped 4.5 percent and traditional declines 3.8 percent from a year ago. Whole-milk sales were 4.6 percent lower and reduced-fat was 5 percent less. Those recent fluid-sales-loss figures were all less than pre-pandemic trends, largely because they were compared to pre-pandemic sales volumes during the first pandemic year.

Domestic commercial use during the December 2021 through February 2022 period was robust for butter, all major types of cheese, and total milk vs. both fat and skim solids.

The US dairy industry exports 16.6 percent of US milk-solids production in February. That followed two months during which the percentage was 14 or less. Those two months represented a pause from the 10-month period of February-November 2021, when monthly exports varied between 16.9 percent and 18.8 percent of US milk-solids production. With declining milk and dairy production from most other major dairy-export suppliers, including the European Union and New Zealand, this year’s monthly exports may remain at those recent increased levels. Driving the February return to previous total export levels was dry-skim milk and all the products within the broad whey complex. Butter and some cheese types also contribute to the increase.

Total US dairy imports during February were about 3 percent of US milk-solids production. Monthly imports have been less than that benchmark during about one-quarter of the 326 months since the beginning of 1995 and have averaged 3.5 percent during those 27-plus years.

The deflation of US milk-production growth, which is approaching a full year in duration, appears to have hit another pause in February – or perhaps a reversal of the start. Following a pause at a no-growth level this past fall, annual growth went decisively negative – reaching minus-1.7 percent in January. But that moderated to about 1 percent in February. Among indications of what portends, the US Department of Agriculture’s latest forecast does not foresee an increase in US milk production during all of 2022, compared to a year ago. Together with continued inflated costs and short availability of feed, replacement cows, hired labor, construction materials and machinery – as well as continued dispersal auctions of large dairies – provide no suggestions for a strong milk-production growth in the near future.

Production of butter and dry-skim-milk products continues to decline as cheese claims a growing portion of available milk. And seasonally growing ice cream and frozen dairy products draw extra volumes. Total cheese production was 6.3 percent higher in February than a year ago, the largest annual increase for a single month since April 2021. Total American and total Italian cheese showed significant annual gains compared with recent months, as did Cheddar as a single variety. The whey streams from the growing cheese production are going to be further processed products whey-protein concentrate, whey-protein isolate, modified whey and lactose. Dry-whey production continues to decline.

Based on several metrics for evaluating individual dairy-product inventories – namely volumes and days of total commercial use in stock – and both in relation to trends, stocks of American-type cheese, lactose and butter – given its seasonal pattern – are balanced as February. February stocks of other-than-American-type cheese, dry-skim milk and dry whey were trending toward over-all – as were the whey-protein-concentrated stocks by volume, but not by the day’s use in stock.

The federal-order Class III milk price increased more from February to March than the other three milk classes, but it remained the smallest of the four. That ensures another month of inflated producer-price differentials and full pooling of Class III milk. The gap between Class III and Class IV prices narrowed a bit in March but remained large enough to cause substantial depooling of Class IV milk for yet another month. At the product level, all National Dairy Products Sales Report prices increase from March to February levels. But the monthly gains for butter, nonfat-dry milk and dry whey were smaller than for several past months. Cheese prices have generally alternated in recent months with flat to reduced prices one month and strong gains the next.

March saw the largest one-month increase in the US average retail price of butter since the Bureau of Labor Statistics resumed reporting retail butter prices in May 2018 – 30 cents per pound or 8 percent. Overall inflation in March increased 8.6 percent, year-over-year. Food and beverage inflation has caught up with that overall rate, and dairy price increases are catching up; Total dairy-retail prices are up 7 percent in March than a year ago. Some individual dairy products are growing faster than the general consumer-price index, with liquid-milk prices rising 13.3 percent and butter growing 12.5 percent in March from a year ago.

The dairy- and grain-futures markets are currently undergoing a Dairy Margin Coverage margin that will increase during the rest of the year. Following several months of steady reductions in its forecast calendar-year-2022 US total milk production, the USDA has reversed itself and increased its projection slightly, based on increased dairy-cow numbers. Its March estimate was 226 billion pounds, which it increased to 226.3 billion pounds in its April World Agricultural Supply and Demand Estimates-forecast update. The April forecast is essentially the same as the 226.3 billion pounds the department has reported for 2021 US milk production.