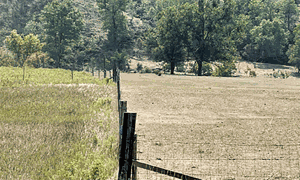 Overgrazing can cause various detrimental effects on rangeland ecosystems. Most of the effects are seen in the short term, but some are unseen and can be lasting.

The definition of overgrazing is “excessive and continuous grazing, which causes damage to grass or rangelands.” The key word that statement is being “continuous,” as overgrazing is determined by the amount of time that livestock is allowed to graze, not by the actual amount of forage that they use.

If livestock are allowed to graze a pasture, plant regrowth occurs, and then the same plants are regrazed before they receive complete recovery – this is overgrazing.

The correct timing of the second grazing event, to prevent overgrazing, will depend on the type and amount of forage that is found in a pasture, as well as the type of growth stage that the forage is ending in preposition.

For example, if livestock is a pasture that is invaded with cool-season grass species, heavy grazing utilization (up to 80%) is recommended if the goal is to break these dominant species up. Then, if sufficient recovery time is allowed before grazing again, this would not be considered overgrazing.

The effects of overgrazing often begin at the soil level and are generally the last to be noticed by the human eye. Usually, livestock production will take the first noticeable hit (decrease in body condition score), because of low forage production and quality, which stems from the health of the soil.

Overgrazing causes a chain reaction in the soil that decreases due to its health:

When the same palatable grasses that livestock select for are constantly grazed, they will eventually be replaced with unpalatable, or invasive plant species. The diversity of plant species will be reduced to a few, undesirable plants that better withstand heavy or repeated grazing pressure, such as:

Overgrazed pastures tend to favor these plant species, as they can tolerate heavy grazing due to low growth points at the plant stem (below where grazing occurs), or plants have characteristics, such as awns (plant parts that cause chewing to be difficult or can poke cattle while attempting to graze) or an unpalatable smell or taste to ensure livestock will not graze them. The plants noted above are characterized by short, shallow root systems, low grazing value and low production. After overgrazing a pasture, significantly lower forage production will be observed in the following years. Palatable, desirable plants often need a longer recovery period to “catch up” to normal production.

If bare soil is present due to continuous overgrazing, weedy plant species will often grow and cover the area – they are ecologically adept at taking advantage of disturbances, such as overgrazing. Weeds act as a band-aid on bare ground, trying to cover and protect the soil from further disturbance or erosion, and they take advantage of areas with low competition for water and sunlight. At this juncture, if good grazing management is practiced, plant succession will begin. The weeds will act as a doormat for more-aggressive plant species, establishing such invasive cool-season grasses.

The invasive cool-season grasses can then be managed or managed to allow native range plants to re-establish in the ecosystem. Re-establishing native plants requires an extended period of time (years) for the plant succession process to occur, even under the best management and ideal growing conditions. If pastures have been continually overgrazed, degradation can be very intense for the original plant species composition to return to what it once was without direct seeding / establishment of native plant species.

Livestock production is generally the first variable to take a hit in terms of pounds on calves, body condition scores and breeding rates. If pastures are overgrazed and / or available plants are of poor quality or palatability, voluntary feed intake (VFI) will be reduced. Within grazing systems, reinforcing loops can lead to increased or decreased behavior, while balancing loops cause behavior to go toward an equilibrium. Understanding grazing feedback relationships is important, because management actions lead to one area leading to unintended consequences in others.

For example, a reduction in forage quality will reduce the digestibility, forage value and eventually reduce energy and nutrient balances in the cascade. The energy and nutrient balances are relative to cattle phases (levels of production), such as yearly steer growth rates, time for heifers to reach puberty and days in milk. Ultimately, failure to keep energy balance will positively reduce body weight, causing fat reserves to be used to meet levels of production, after which muscle tissue will begin to be mobilized, an extremely inefficient process. Use of fat and protein reserves will be visibly evident in body condition scores (BCS). It is helpful to keep records of the weight to be used in combination with an objective measurement of body condition scoring, a subjective measurement (it differs from person to person). New technologies, such as real-time precision weight scales, help provide more timely cattle performance data on which to make management decisions.

Maintaining a positive energy and nutrient balance is important for successful cattle breeding. If grazing heifers or cows, consider matching animal requirements to forage quality and quantity, as forage will change throughout the grazing season, as do the nutrient requirements of cattle at different levels of production. Throughout different production phases, crude protein (CP) and energy (total digestible nutrients; TDN) requirements change, especially during pregnancy and lactation phases.

Primiparous heifers, or heifers breeding back as two-year-olds, need special attention in terms of nutrient requirements, as nutrient demands include calving for the first time and currently nursing a newborn calf, while continuing to grow into a mature cow. In terms of the big picture, if you are overgrazing forage, you are setting your cattle up to potentially reduce breeding rates because of poor forage quantity and quality. An unintended consequence is that open cattle are still consuming valuable forage resources that could be utilized by pregnant cows or heifers, wasting animal unit months (AUMs) on pasture.

The amount of degradation that can be done to the rangeland ecosystem over one year is overgrazing. From lowering soil health, to harming the native plant species and decreasing overall forage production, to lower weaning weights and breeding rates, the negative impacts will be seen and felt for years to come. Thus, it is recommended that producers develop a strong grazing plan and implement good recordingkeeping and monitoring to prevent overgrazing from occurring in the first place.

Get the latest agriculture news delivered to your inbox.