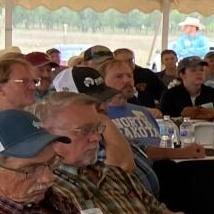 It takes a different mindset to change an operation that focuses on regenerative ag practices and soil health principles in raising grass, crops, and cattle.

But according to Burleigh County Soil Conservation District (BCSCD) supervisors and ranchers Cody Kologi of Moffit, ND, and David Bauer of Regan, ND, the time and effort spent doing it reaps results.

At Menoken Farm’s second annual “Crops, Covers, and Cows” in 2021, the supervisors talked about returning to their soil, grass, and grazing the way nature intended, which is where the regenerative ag starts on the farm / ranch.

David Bauer, who farms / ranches with his father, Glenn, and brother, Steve, said his ranch management became “about the whole system” after he attended a holistic management school taught by Josh Dukart.

“Everything we do is trying to get back to the whole system of thinking instead of just a single crop that we’ve been doing that year,” Bauer said. “We’re thinking how it will affect the ranch next year or the year after that.”

Bauer believes soil, grass, and cattle health begins with keeping the soil covered and keeping a living root in the soil at all times.

“Although tall is a plant, it is at least that tall underneath the soil, so every time a plant is harvested on top, it loses what is underneath also (the root),” he said. Nutrients are brought in through the roots and microbes need sugars from the roots.

If a cow takes one bite of a grass plant, Bauer says it will take those reserves, slough off what it needs, and then recuperate the plant on top.

When cows continue to eat more than half the plant, the root underneath gets smaller and smaller.

“If you have a tiny root, you’re not going to get the nutrients that the plant needs in that second year, or even later in the first year,” he said.

That’s why Bauer moves his cows every 3-7 days. They take half and leave half, leaving a living root in the soil. The grass regrows with rest.

“It is like diversified grazing. They’re in there for a high density for a short period and then it’s the rest and recovery that you need to pay the most attention to, “Bauer said.

While grazing, Bauer wants his cows to eat all the plants in the pasture, not just the “chocolates” – their favorite grass. To do that, he moves electric fence.

“We use aircraft cable. I’m able to go longer distances with the aircraft cable and the conductivity is a little better than if I used poly wire, “he said.

Sometimes the Bauer will unwind the aircraft cable to fit around a large pasture and use the poly wire to divide the pastures into cells for grazing.

There are benefits that he has seen through his diversified grazing program and the following soil health principles.

Grazing spreads manure and urine throughout the pasture, fertilizing the grasses as the cows move. With intensive grazing and other soil health principles, the organic matter has increased in its soil in the pastures.

As soil organic matter increases, so does the available water capacity, he points out.

“Every 1 percent increase in organic matter results in as much as 25,000 gallons of available soil water per acre,” Bauer said. “If it’s overgrazed or over-tilled, it loses its organic matter, and every time you till, you lose carbon in the soil.”

Bauer pointed out that cover crops can help keep the soil covered. His cows not only graze grass, but also cover crops in late fall and crop aftermath, as well.

“You have a living root in the soil and depending on the type of plant you have, it can help bring phosphorus up to the surface so that it is available to your annual crops or it can be nitrogen-saving. If it is a deep-rooted plant, it can help increase water infiltration, “he said.

Right after the Bauers harvest, they will seed a cover crop, usually a cooler season crop, as it will stay greener longer in the fall.

“A lot of times, we’ll plant a rye or a rye vetch that will come up next spring and hold water and start the nutrients coming,” he said. “Then we’ll seed into that and desiccate the rye.”

That keeps a living root in the soil and feeds the microbiology to help get the spring crops.

The Bauers believe in diversity in the crops to help the soil.

While they use herbicides when needed, they are trying to get away from fungicides.

“What we’re trying to do is just have our soil healthy enough that we don’t have to have any fungicide at all,” he said.

For Bauer, it’s all about keeping the system healthy.

“If we can keep carbon in the soil and grazing in the native grasslands, that is the most pristine way to get carbon into the soil. The second best is no-tilling, because we’re continually building that soil if we’re grazing properly and we’re keeping it in a native grassland, “he explained.

The Significant Drought was experienced in the state last year, but Bauer had enough grass that he didn’t need to graze all the way down.

Bauer is hoping his early grass comes in well this year. It is already looking that way.

“Last year, since there was no water (with the drought), there was only very little recovery. But hopefully the grass gets going this year and comes up again because there is still a living root there. I’m looking at it now, and it’s turning green and looking good, “Bauer said.

Cody Kologi, a backgrounder and stocker operator, said he is increasingly an all-grass ranch, which is managed holistically. He uses intensive grazing on his pastures with his cattle.

“We manage our pastures intensively, and what I mean is that we’re high-density and low-frequency,” Kologi said. “We’re hitting the grass hard and not coming back for 60, 80, or even 365 days.”

While a 70-80-day grass rest period is “optimal,” the less moisture the ranch receives, the longer the rest period needs to be.

Perennial grasses store a lot of energy in their roots.

“Because of that, there are longer roots. You can withstand less rain. You are actually growing your organic matter and your soils are carrying a higher water-holding capacity, “he said.

The Kologis have seen some “incredible changes” happening in their perennial pastures, and they have seen the changes happen by the second year.

“We’re seeing some incredible changes in the diversity of our grass – the vigor of our grass,” he said.

They have found through grazing, resting, and recovering after grazing that their grasses and soils have improved. New and diverse species of grasses from the grassland’s seed bank “hundreds of years ago” are popping up in their pastures all the time.

“The more intensively you graze, the faster the results, and just by letting the grass rest we started noticing warm season grasses like Big Bluestems and Prairie Sand Reed showing up. It’s just been exploding in our pastures. “

“Basically, you give the grass time to express yourself. With this high-intensity grazing, you’re mimicking nature, “he said. “If it’s getting a lot of trampling (from cattle hoof action) and urine and impact, it’s saying, ‘Hey, let’s grow. This is good stuff for us. ‘”

Kologi also grows cover crops and feed crops to feed his cattle over the winter.

He does not use pour-ons, which kill flies on his cattle, because that would kill dung beetles, which are healthy for the soil. Instead, he always keeps the cattle moving ahead of the flies.

“We’re constantly moving our cattle daily to fresh grass pastures, so we’re always ahead of the flies,” he said.

It takes Kologi a couple of hours to set up to move the cattle into a new pasture.

“It probably takes a couple of hours to set up a new, temporary electric fence and it takes 10 minutes to move 800 yearlings,” he said.

They have a good water system and miles of pipeline to always bring fresh water, as well as creeks and stock dams.

“Typically, a tank can water four pastures,” he said.

With the improved soil and grass health, Kologi has been able to increase its stock by 30 percent.

“It’s like buying a 30 percent larger ranch,” he said.

As a board member for the BCSCD, Kologi said the district owns 120 acres of farmland, called the Menoken Farm.

“Menoken Farm is where we can do these tests and educate and inform people about soil health. That ‘s our main motivator there. We use regenerative ranching and farming practices at the farm, as well as rotational grazing of sheep and cattle, “said Kologi. “We use cover crops followed by cash crops, or vice versa, in the name of building soil health and resiliency.”

“Jay Fuhrer (a soil specialist at the farm) has been my mentor, and I’ve learned a lot from him,” he added.

Fuhrer said there would be another “Crops, Covers, and Cows” on Aug. 10 this year, so mark your calendars. It will be about integrating cropping and livestock systems with cover crops as the bridge.

“You’re taking cropping and grazing systems and taking a look at the benefits and challenges of each of those systems. The goal is to integrate the two together with the livestock. The cover crops are the bridge, “Fuhrer said.

“We’ll have more good speakers this August and more good discussions. In the morning, we’ll be at Menoken Farm, and in the afternoon, we’ll be at the Cody Kologi farm near Moffit, “he added.

Get local news delivered to your inbox!