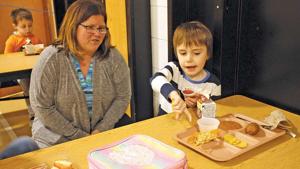 LINCOLN, Ill. – On Taco Tuesday at Adams Elementary School, Aleigha Myers picked up her lunch before sitting down with her friends at her table.

The lunches this kindergartner receives are different. More than 40% of Aleigha’s meals are from locally raised meat, poultry, grain and veggies.

Myers is one of more than 1,110 students in the Lincoln Elementary School District who eats from-scratch foods for lunch as part of a program.

“In my eight years as superintendent, this is probably the best project I’ve ever been a part of. It’s extremely rewarding to see the benefits for the kids, the parents and the community, “said Lincoln Elementary District 27 Superintendent Kent Froebe.

When the district’s food director, Connie Crawley, first approached him with the idea in 2019, he had some reservations. Froebe needed reassurance it wouldn’t cost more and that the kids would like the food.

The new program has both of those goals. Food costs have gone up slightly since the program started three years ago, “but everything costs more now,” he said.

And, the kids like the food. The children’s excitement was clear the first time they had homemade hamburger patties, Crawley said.

“It takes everybody,” Crawley said, including kitchen staff, custodians, the superintendent, school leaders, teachers, principals, parents, farmers and the community.

The program started with funding available from Lincoln Memorial Hospital. Angela Stoltzenburg, director of community health at the hospital, said all hospitals have an attack on important health issues in their communities. She encourages others interested in farm-to-school programs to check with local hospitals when seeking funding.

“The cafeteria is the final frontier,” Stoltzenburg said.

The team got technical support in changing food offerings from Chef Greg Christian, a sustainable food consultant and founder of Beyond Green in Chicago. He offered advice in finding out what children are really eating, which included taste tests and checking the garbage to see what food they threw away.

“Chef Greg” also helped adapt the tastes of Central Illinois kids, including shepherd’s pie and “horseshoes,” two dishes he wasn’t familiar with on the menu. He soon learned the horseshoe is an open-faced sandwich originating in Springfield, Illinois, which traditionally features thick, toasted bread, a hamburger patty or other choice of meat, French fries, and cheese sauce.

This developed a healthier version. Crawley said it has not been served all the time, but is a popular treat for students occasionally.

Students give input, both good and bad.

“Kids say, ‘It was gross or it was too dry or too cold,'” Crawley said, and her team listens and tries to fix the problems.

This is among many Midwestern schools getting food revamps. For example, a pilot project from 2019 to 2021 brought Nebraska greenhouse foods to school lunches. In Iowa, the Farm to School Program, mandated by legislation in 2007, has been linking students to farmers for years.

Crawley and Bloomington farmer Mark O’Rourke were both guest speakers at the 2022 Local Food and Farmers Market Conference March 24 in East Peoria.

O’Rourke said he chooses to help the farm-to-school program serve as a credible customer for his vegetables and his core beliefs with matches. He grows about 15 acres of produce near Bloomington.

It would have been easier to sell his crops to Bloomington area schools, but that’s not an option yet. Local food advocates, including Dave Bishop, a retired organic farmer, are actively trying to make that happen.

The school needs a good invoicing system for sales, ability to deliver at times and flexibility to be competitive with other vendors.

“It’s different, but not that complicated,” O’Rourke said.

Another barrier for some small farms is packaging and processing, he said. O’Rourke likes the idea of ​​the new FarmFED Co-op in Mt. Pulaski, which hopes to provide some aggregation and processing services in the future. Another challenge is that some local farm products are ripe when kids are out of school so processing or freezing options would be an advantage.

“You have to have the grace,” she said, and back-up plans.

Switching to local foods is not as simple as making local contacts and getting support from a superintendent. Food directors have to follow the federal mandate to buy food at the lowest price available.

Proposed new legislation that would allow food directors to use other criteria at just the lowest price, O’Rourke said. Today for food purchases under $ 25,000, Crawley is allowed to accept informal bids and prices other than quality. Her specifications include geographical preferences and educational opportunities where children can visit farms, for example.

During one of O’Rourke’s visits to the school, he showed students fresh produce he was bringing,

“Another time, beef farmers came and had warm burgers with the kids,” Crawley said.

And sometimes local prices are cheaper. She can buy local romaine lettuce in season cheaper than long-distance trucked lettuce.

Crawley and her staff did from-scratch lunches through the COVID-19 school disruptions.

It was during the pandemic that Nicole Moore, who works for the Department of Agriculture, saw firsthand the food her children’s school was sending home. After listening to Crawley’s presentation at a local foods event in East Peoria, Moore was excited to see if her school district could find a way to serve more local food.

“I’ll have some conversations with the school district,” she said.