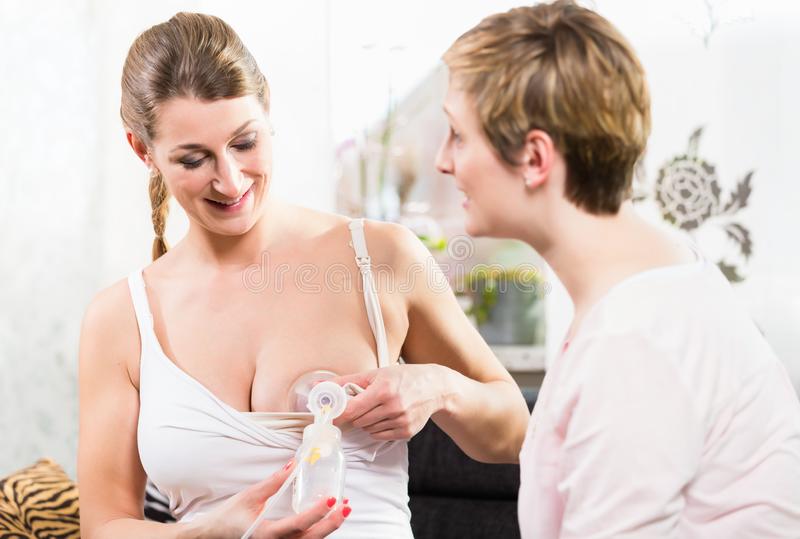 Dr. Joseph Akinde, a Consultant Obstetrician and Gynecologist, has said that some women who aren’t pregnant or nursing a baby may secrete milk abnormally from their breasts if they have very high prolactin levels in their system.

Dr. Akinde stated that it is possible for a woman who is not breastfeeding to lactate if such a woman has high prolactin levels.

According to the Mayo Clinic – a medical center focused on integrated health care, education, and research, high prolactin hormones in women help regulate important functions such as growth, metabolism, blood pressure, and reproduction.

“Both males and females produce the hormone prolactin, but it is known for telling the body to make breast milk when someone is pregnant or breastfeeding as the production of prolactin takes place in the pituitary gland.

“Prolactin levels steadily increase during pregnancy and remain elevated postpartum in people who are breastfeeding. The levels typically return to normal within 2–3 weeks after birth in nonlactating people and within six months postpartum in those who are lactating.

“If the levels are higher or lower than the expected level, it can indicate a problem,” the Medical News Today paper said.

Speaking with PUNCH HealthWise in an interview, Akinde who works at the Living Spring Hospital and Maternity Home, Ejigbo, Lagos, explained that abnormally high levels of prolactin may be due to pituitary adenoma, or in some instances of stress.

Pituitary adenoma is a benign tumor of the pituitary, the master gland that controls other glands and influences numerous body functions including growth.

Although the tumor itself is not cancerous, it may affect pituitary function, and, therefore, may need to be removed.

On why some elderly can breastfeed babies they did not give birth to, the gynecologist said, “Some grandmothers have been known to breastfeed their grandchildren for many years after they had stopped bearing children.

“Putting a child repeatedly close to the breast of such grandmothers who had successfully nursed her children some years ago has been known to stimulate milk to successfully breastfeed the grandchild, particularly, in cases where such newborns have lost their mothers and only the grandmother is available to nurse the child.

“Yes, it is possible for a woman who is not breastfeeding to be lactating.”

According to the expert, some drugs can also be used to initiate or improve lactation. He added that those drugs are called galactogogues.

“Drugs used to stimulate such milk production are without any major side effects on the mother,” Akinde stated.

He, however, explained that experiencing milk secretion when not nursing a child can be a health concern.

He said, “Experiencing milk secretion from the breasts when not nursing a baby could be a health issue.

“It could be a cause of infertility in women of childbearing age who wish to be pregnant.”

According to an online health portal, Healthline, “lactation is the process of producing breast milk. For women who are pregnant or recently gave birth, lactation is normal. Hormones signal the mammary glands in your body to start producing milk to feed the baby.

“But it is also possible for women who have never been pregnant and even men to lactate. This is called galactorrhea, and it can happen for a variety of reasons.

“Galactorrhea happens to be around 20 to 25 per cent of women.

“The most common cause of breast milk production is an elevation of a hormone produced in the brain called prolactin. Elevation of prolactin can be caused by, medications, underlying medical issues, a tumor and overstimulation of the nipples, ”Healthline stated.

According to the health portal, “some medications may cause galactorrhea like antipsychotics, antidepressants, birth control, heartburn medications, certain pain killers, blood pressure medicines and medications that contain hormones.

“Some medical conditions may also contribute to lactation when not pregnant like thyroid issues, kidney or liver disease, chronic stress, tumors or disease of the hypothalamus, any trauma or damage to breast tissue and high levels of estrogen in newborns.”

It explained that many of the causes of galactorrhea, such as hormonal imbalances, tumors, or other medical conditions, are beyond control.

“But there are a few things you can do at home to reduce your likelihood of lactating while not pregnant, avoid bras or clothing that irritate your nipples, avoid stimulating breasts too often and practice healthy ways to relieve stress.”

“If you haven’t been pregnant or nursing in six months and you’re lactating or seeing any other type of discharge from one or both nipples see your doctor. If something serious is causing the discharge, it’s best to start treatment early, ”it said.

JUST IN !!! WHO Allays Breastmilk Fears From Coronavirus