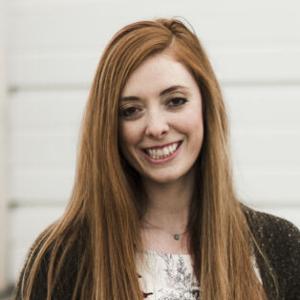 “From the field to finance, women are central to UGC, bringing high-quality grains from American farmers to markets around the world,” said Augusto Bassanini, CEO and President of UGC.

Bassanini pointed out that giving women opportunities to fulfill some of UGC’s most important duties has made them more successful in feeding people around the world.

Meg Johnston, a hedge desk analyst at the corporate offices in Vancouver, is one of those women recognizing UGC.

Johnston has come up through the ranks, working at elevators in southwestern North Dakota and Washington – working with producers and grain markets around the world every step of the way.

Johnston grew up in a hobby farm in central Oregon, where her parents helped her and her brother acquire horses and other animals at shows at 4-H Achievement Days and county fairs.

“I got involved with 4-H and FFA early on as both my parents were former ag kids from Montana and Idaho, so we grew up with horses, cattle, sheep and chickens to show for 4-H and other projects,” she said.

In addition, Johnston’s grandparents were dairy and sheep farmers in Idaho, and she would visit their operation as a kid.

“I loved every minute of it. If you take someone from the city and take them to the farm, anyone would be fascinated by milking machines and baby calves. It was always fun, “she said.

Johnston said she gained confidence in the FFA leadership, public speaking, and parliamentary procedures and participated in various FFA contests. She learned there were carers in agriculture that weren’t necessarily operating a farm or ranch.

“In FFA, I was fortunate to have a great advisor who made sure we had good internship opportunities, such as with veterinarians and at feed stores,” she said. “I’ve always been a business savvy, so I was drawn to the business side of agriculture and working in grain merchandising or sales and marketing.”

“It shaped my determination to go to Oregon State University with a bachelor’s degree in agribusiness management and that is definitely from my experience with FFA,” Johnston said.

At Oregon State University, CHS, a large buyer and trader of grains and oilseeds, held a recruiting event for those students who were graduating.

“It was a program they rolled out for college graduates for two years, and I was lucky enough to get a position with them,” she said.

CHS brought the grads they hired, including Johnston, to their headquarters in Minneapolis where they had the opportunity to work for six months in four different departments.

“It gave us a really good look at what CHS does for agriculture,” Johnston said.

After the CHS program in the two years, Johnston decided what she really enjoyed doing was grain merchandising.

She applied for a position in grain marketing at CHS Southwest Grain in Gladstone, ND

“I moved to Dickinson, ND, and worked as a grain marketing assistant out there,” she said.

“They were so helpful – wonderful people with a wealth of knowledge,” she said, adding she still calls and talks to them. “Once Jim and Brian had put knowledge into an actual applied hands-on situation, that’s where I really started to understand hedging and how it works.”

Johnston stayed busy marketing grain at CHS Southwest Grain while she was there for three years.

“I was buying and selling grain from farmers, and I had a very well-rounded experience at Southwest Grain,” she said.

While she was a grain marketer in the office, which was separate from the elevator with its towering grain bins, Johnston would occasionally check out what went on when farmers hauled in their grain.

“Every now and then, I’ll go out there in the house and talk with the guys because I’ve never worked in a grain elevator before,” she said. “When I first started, I’d go out there for a couple of days, and they showed me how they pull samples from the trucks with the big arm.”

In the house, they would run grain samples through computers to obtain grain data.

“I never went out there and physically dumped the trucks, but they were explaining to me how they sorted grain into bins,” she said. “If they needed help, I would help (put metal seals) rail cars, which is always very fun in North Dakota weather.”

Johnston explained that with tagging, she would put the seals on the rail cars as a safety measure to make sure they were not opened or tampered with – from the time that they loaded the rail car to its destination. General Chat Chat Lounge

“It was really fun because Jim and Brian fully believed in me and gave me every opportunity in grain marketing, allowed me to make mistakes and learn from them and then grow from it, which is what you need when you’re going out,” she said.

After CHS Southwest Grain, Johnston took a position in dairy marketing in Seattle. She liked the challenge of all the different aspects of ag marketing.

“It was eye-opening – learning how to market dairy products internationally,” she said.

While there, Johnston met her future husband, Jonathan, and they have a baby, Gwyeneth.

After a time, Johnston realized she “still liked the world of grain.” She knew Brian Liedl, senior merchant at UGC, as well as others, when she worked at CHS and CHS Southwest Grain.

UGC offered her an opportunity to work on their hedge desk at the corporate offices. She had the experience to take on the challenge.

“I worked on hedging when I was with CHS and I sold commodity futures while I worked at CHS Southwest Grain. I sold futures at my last position in dairy, “Johnston said. “It’s definitely exciting and fast paced, and it’s a lot of research to stay up to date on what’s going on in the world.”

Johnston said she enjoys her job as a UGC hedge desk analyst, and working with Rob Froom, the senior central hedge desk manager.

“Rob is a wealth of knowledge and he is great at sharing resources and pointing us in the right direction. It’s really easy to learn and find more information with such a great team, “she said. “If someone hears something or finds something, even if it’s not directly related to what they’re doing, they’re great about sharing it.”

With hedging grain, Johnston knows how grain movements can be affected by geopolitical tensions around the world.

“The world today is so interconnected, and with something as large as Ukraine, the Russia situation is definitely affecting grain markets. That ‘s unfortunate, “she said.

The US dollar is still high, compared to other countries’ currencies, so even more wheat from the US gets purchased this year is still unknown. But if something major happens in the world, then we could see businesses forced to come to the US and pay higher prices, which would cause our grain prices to go up here in the US, she said.

Johnston explained that during harvest, grain prices dip because there is more supply available.

“As we go throughout the year and supply dwindles, the price tends to go up a little bit. We have definitely seen prices jump up at times, not just in spring wheat but in winter wheats and white wheats, as well, “she said.

In addition to wheat, UGC handles corn, predominately out of Oregon, sorghum, and a small amount of other commodities from Montana, such as barley or peas.

“United Grain is predominantly a wheat company,” she said.

Johnston said she was honored to be recognized during UGC’s Women’s Empowerment Month, and as such, she likes to see more young women becoming involved in grain hedging and marketing.

At 30, Johnston is young, himself, and has a long career ahead of him in an elite job in the grain of the world.

“Again, this is not something I would’ve thought about prioritizing joining FFA and going to college. I didn’t even know there was commodity future trading, “Johnston said, with a laugh.